After the Second World War when Märklin again supplied the German market with model trains, you could in some gauge 00/H0 models find a mechanism, which controlled the lights depending on the direction of travel. The mechanism was called a Schleppschalter and was connected to the driving shaft either by sitting directly on the shaft or by a cog wheel. When the motor then was running, it would make the mechanism move between two contacts and control the light. It was made out of pressed paper for an insulator and nickel plated sheet metal for the contacts.

Roughly there are two different versions of the mechanism. The first version, or type 1, is not sitting directly on the driving shaft, but is driven by a cogwheel except for the type 1’s in the MS 800’s and TP 800’s. Here the moving contact is sitting on the driving shaft. Another characteristic of this type 1 is that the moving contact is hold in place by a thin piece of sheet metal. The second version, or type 2, is sitting directly on the driving shaft and is hold in place by a spring.
Type 1 was used from 1947 to ca. 1949/50 and type 2 from ca. 1949/50 to ca. 1952/53.

In ca. 1952/53 the mechanism disappeared from all at the time current models and the lights were now controlled by the reverse unit. There is no clear reason why the mechanism suddenly disappeared, but in some models such as the RE 800.2 the frame was strengthened in 1953, so there was no space for it under the lead weight. 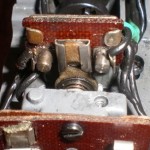 The above article was contributed by Thor Bayer Andersen }