Collectors are sometimes pleasantly surprised to open a Marklin box and see a bright, shiny silver seal attached to their loco or loose inside the box.  What are these special tags?

Marklin has always been known for quality, but one way that they insure quality before locomotives leave the factory floor is by testing each one.  This practice is still done today with digital locomotives that travel through a special test layout with all possible curves, turnouts, cross-over tracks and more.  And after they’re fully tested they are packed carefully into their boxes and ship off to their final destination to a Marklin enthusiast’s layout or display case.

The earliest Geprüft or “checked” / “tested” tags were first seen on O scale locomotives from the 1930s.  These tags were red/white and made out of a paper material instead of a silver foil like the later tags for 00/HO.  They are extremely rare, and as such it’s difficult to form any patterns on how these tags were used at the factory.  Certainly they were not applied to all O Scale locomotives because many mint-in-box locomotives have come up without these tags.  We have seen large “Super-Model” locomotives of the 1930s with these tags such as the SLH and ME and so perhaps only the larger, more expensive locomotives were given these special tags.

The First Geprüft Tag for 00

During the beginning of the 00 range in 1935, Marklin did not tag their locomotives after testing.  The first possible tag surprisingly comes from around 1949, if the tag is indeed original.  The tag has an “SK” stamp on the back and was sold as part of an auction for an empty SK 800 N box with date stamp from 1949.  As always, we have to be careful with assessing the originality of such scarce pieces like this tag.  The auction came up in Germany where many items are faked, including boxes and tags.  However, here it seems the seller did not know what they had and so possibly the tag truly was just found with the box.  Another example of this round paper tag is seen in Christie’s Fine Marklin book on a DL 800 which also dates from the 1948-1949 period roughly.

Update: after posting this article, several collectors wrote in confirming the originality of this style of paper circular tag.  The tags appeared in 1948/49, even during times when silver tags existed and were perhaps used when silver tags were not in stock.

Silver and Colorful Geprüft Tags for 00

The earliest shiny, silver tags that are more commonly seen today were a dark red color.  Over the years there were several different colors and variations in the font and script.  The colors do seem to coordinate with the year that the locomotive was produced.  As always when doing our research we focus on finding examples that we know are 100% original.  As such, in this review we do not include any examples from auctions, especially those in Germany where the wrong tags are added with replica boxes and instruction sheets.  Instead, all examples shown here were sourced from collections in the United States and come directly from the original owners.  Because Marklin is not as popular in the US and many Marklin trains were brought over from Europe and never used, they are the best source for studying Marklin trains in their original condition as they left the factory. 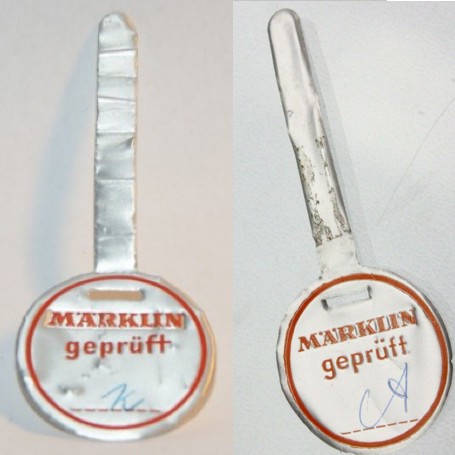 Comparison of two red tags with different “ft” at the end.  The tag on the right with the separate “f t” is later.

This is the earliest style, and featured on the RSM, RET, and G in the pictures below.  On the RSM tag, for instance, you will notice a wider letter-form “geprüft” font and barely separate “F” and “T.” Also, the circle and stem feature a larger “fillet” – the round concave blend curve in the outline shape.

The back of the tags were commonly stamped with model numbers and we’ve seen serif (vestige of paper circle stamps) and sans serif stamp (similar to early box labels) fonts.  Beware that replica tags can have these model stamps too. 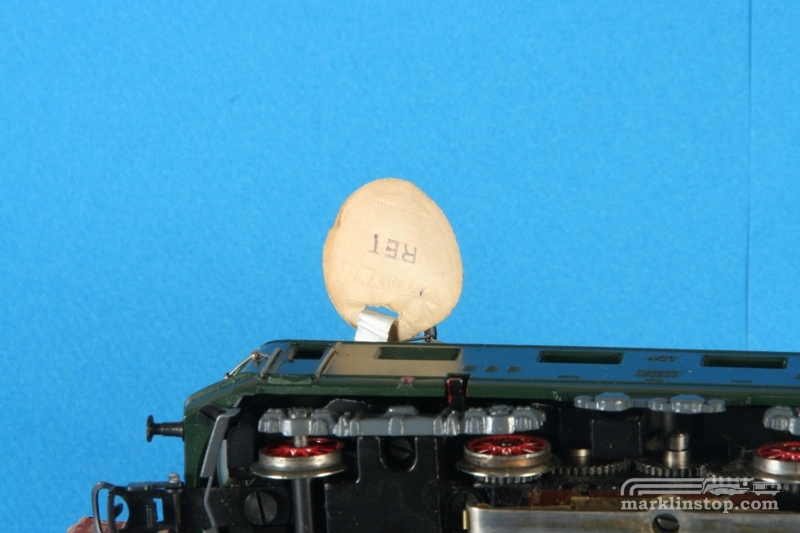 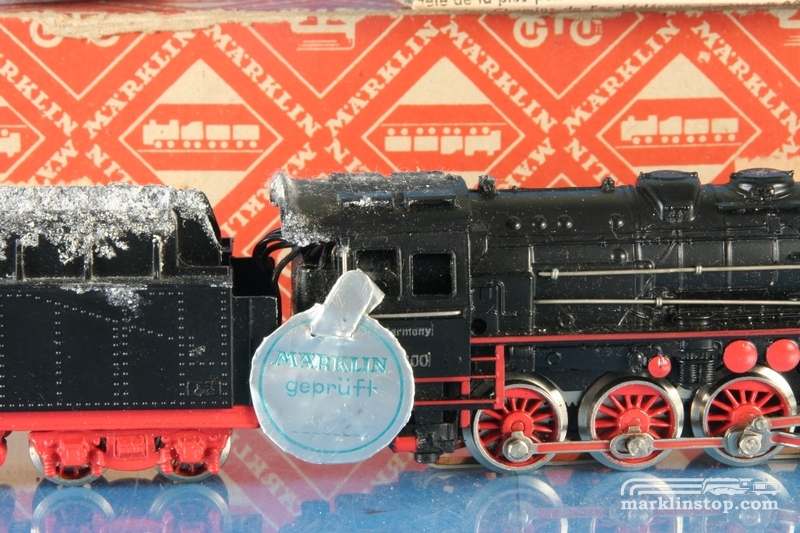 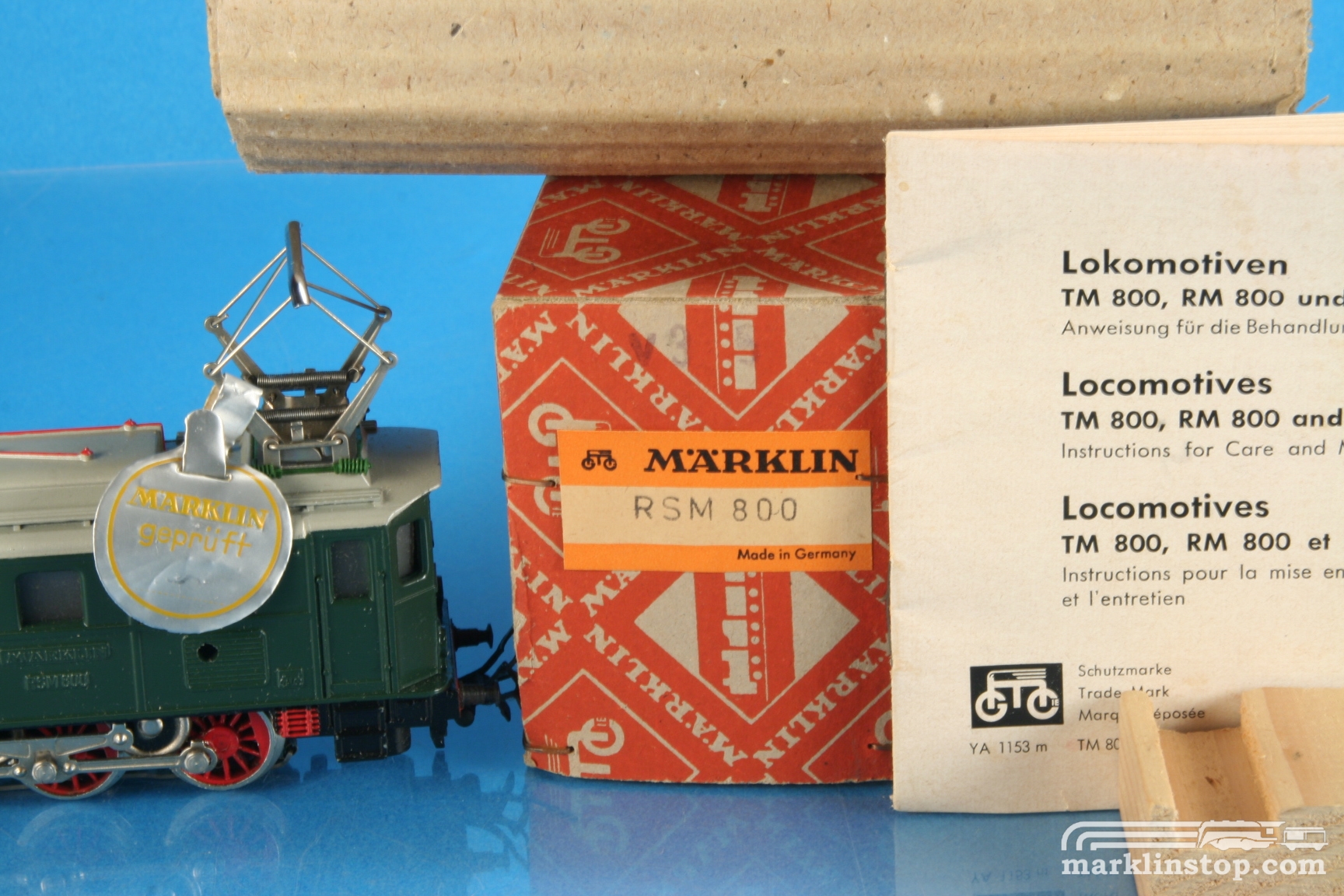 Orange tag for RSM from 1955 source 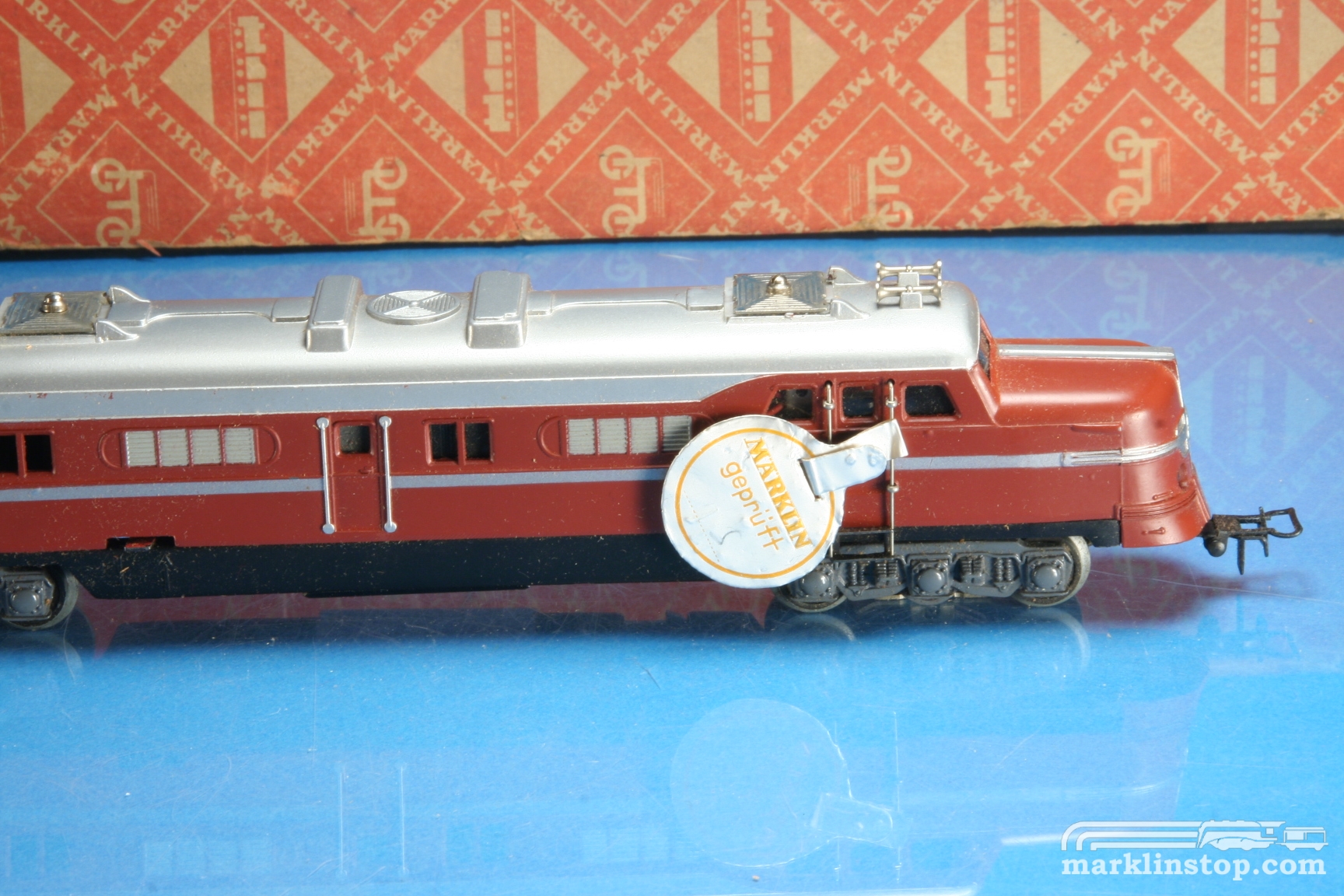 This is the second design of the tags, featuring joined “F” and “T” letters. 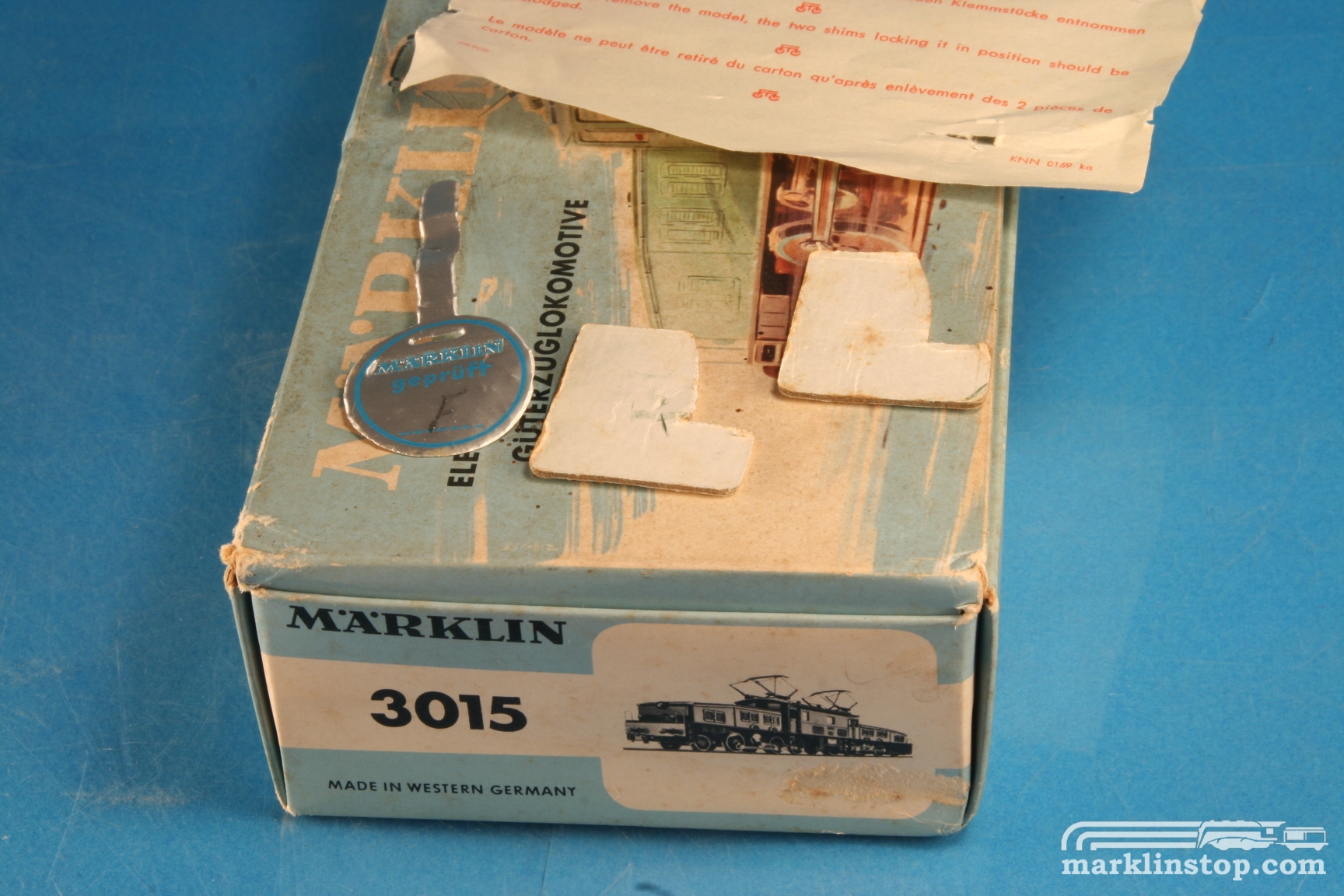 Seeing the tags in action!

A short Marklin video shows the tags as they are waiting to be added to the tested locomotives! 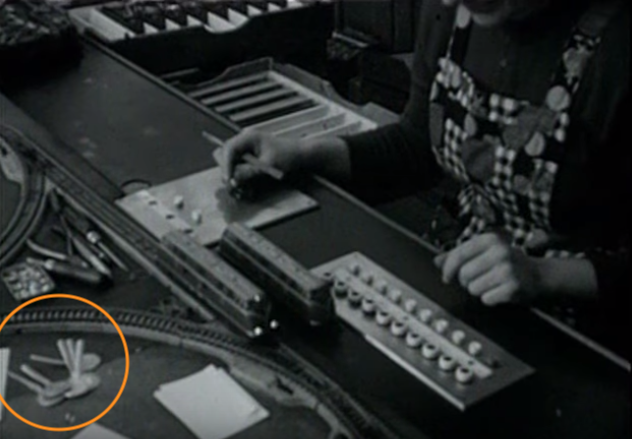 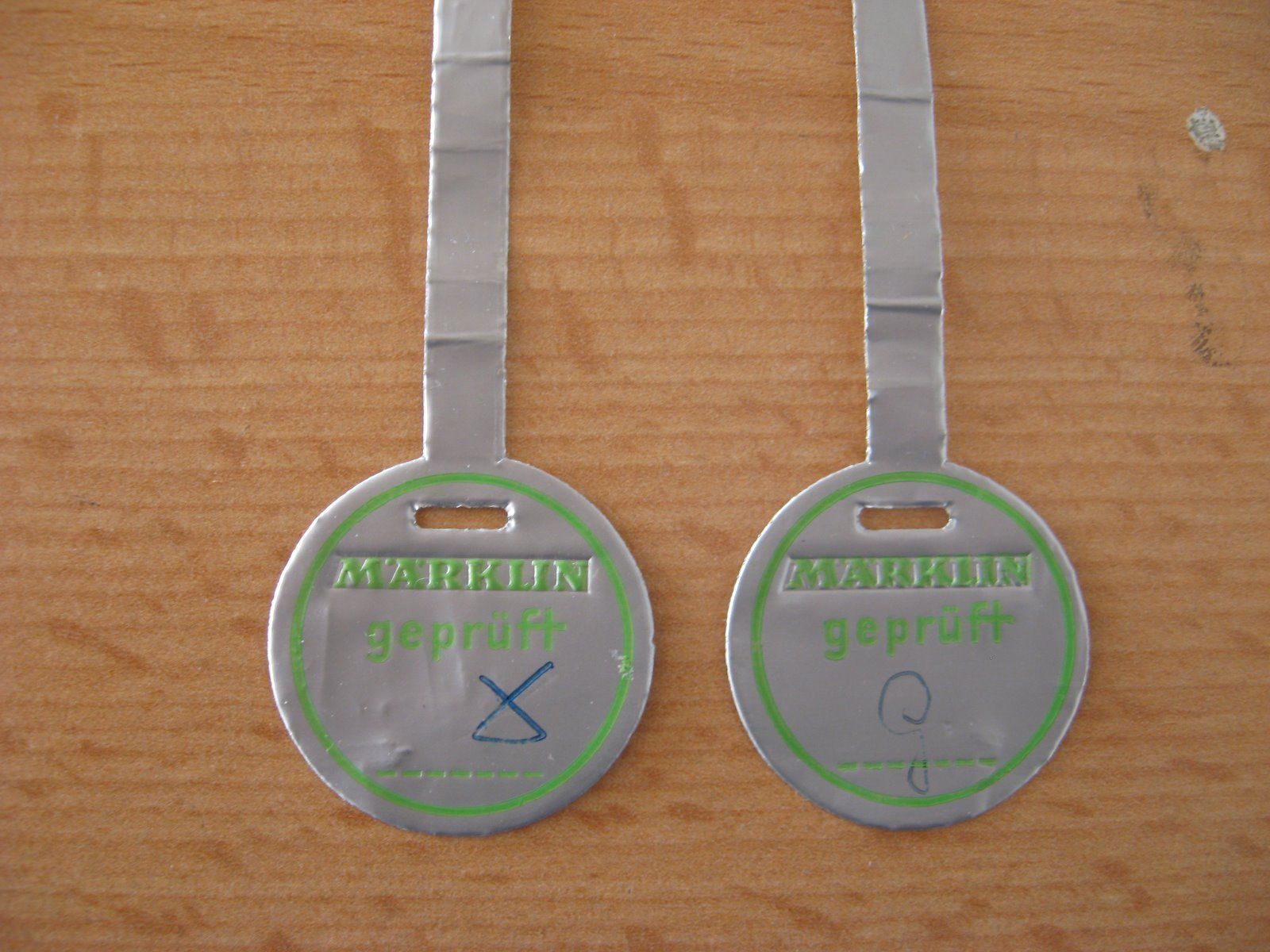 An example lot came up at auction with some obscure tags.  Seemingly one is marked with “SLR” which was a model only produced in the pre-war years when such tags have never previously been seen.  Although they look old – worn and yellowed – we doubt the authenticity of these tags. 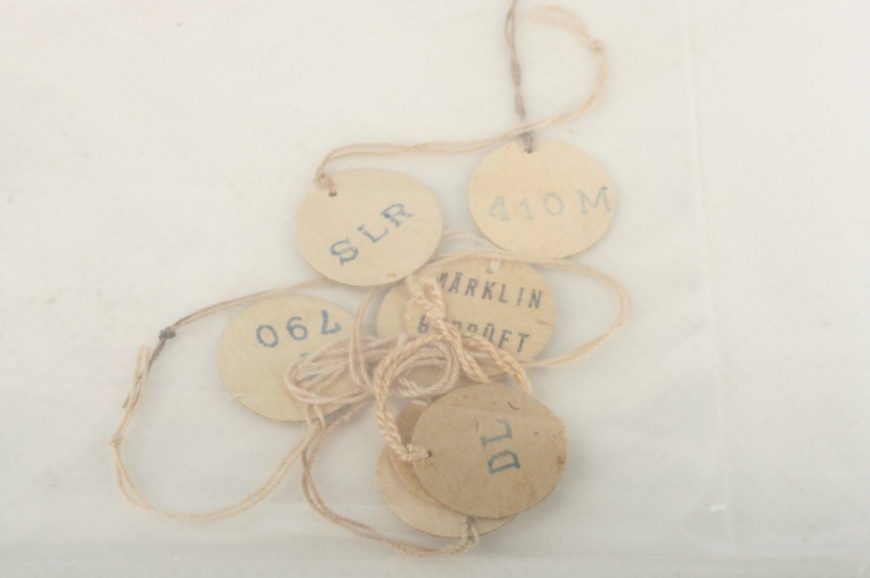 A special thanks to collector Xavier for investigating how different colors have shown up over the years.  Also John for his help with some corrections and analysis of the fonts.  And the forum post on the German FAM.