From the Hands of Masters: Prototypes, Pre-Series, and First Versions from Marklin

When it comes to collector highlights there is none more rare and sought after than a prototype or first series.  A locomotive like the CCS 800 might be rare in any version, and if an earlier version is rare, then a first version or even a pre-series is an absolute top rarity.  Marklin produced various types of prototypes – some that were actually pre-series and distributed to early customers and others that stayed on the factory floor and were meant to instruct and shape the design and manufacturing process.

Why were prototypes made?

In almost any production or manufacturing process, usually before expensive molds and tooling are made, master craftsmen made a prototype first.  This helps the designers and engineers understand how the real model might perform before investing heavily into the manufacturing process.  For instance, with model trains, the designer must understand if the locomotive has the proper weight to both pull cars and not slip or derail on the tracks.  Too many wheels, too close together, might mean the locomotive cannot handle a certain radius of track.

How were prototypes made?

In the early days, most prototypes were made almost entirely of brass.  Brass is rather easy to work with as a metal because it conducts heat well which makes it good for soldering and it is a fairly soft metal so it can easily be shaped.  Even with these properties it is strong enough to handle tapping for screws and holds its shape well.

While the E 800 LMS locomotive was not a prototype in the purest sense for HO Scale Marklin, it could be seen as a pre-series because of its very limited quantity and the construction of some of its parts out of brass. 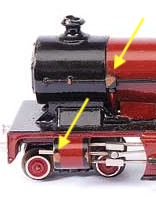 The brass and tinplate construction required incredible precision and the Marklin craftspeople were certainly up for the task.  Each piece would have to be cut, filed, and soldered into place.  This is an incredibly time consuming process.  Certainly with the aid of forms, jigs, and other tooling production could be sped up, but since prototypes were made in small quantities most of the world was done by hand.

Although not every locomotive has a known prototype in existence, it’s most likely that each locomotive or train Marklin ever produced did indeed have an original prototype.  Today many of the prototypes are in the Marklin museum such as the CCS 700, TW 700, etc.  Below we can see the prototypes for the RSM 800 (1), the English Pytchley locomotive (2) which was never made, the E 700 (3), a coal car based on the O Gauge design (4), and TW 800 (5). 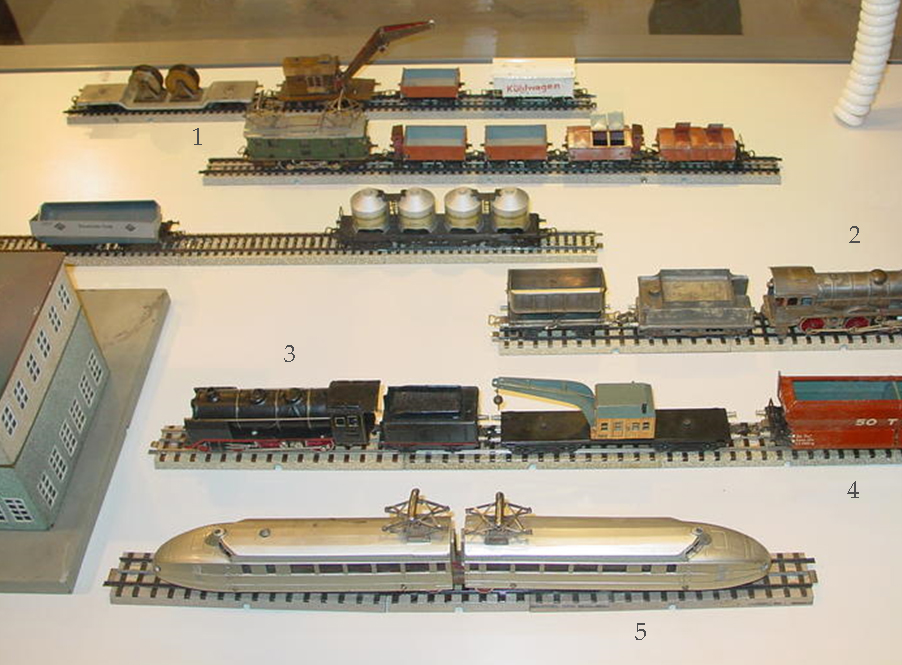 Marklin prototypes at the museum

Such models are highly sought after by collectors because they very rarely left the factory building and certainly were not sold in any main products catalog.  As such, there are in many cases wonderful stories to go along with how a prototype did in fact leave the Marklin factory.  Many times Marklin employees would be allowed to keep them or they were given as special gifts. 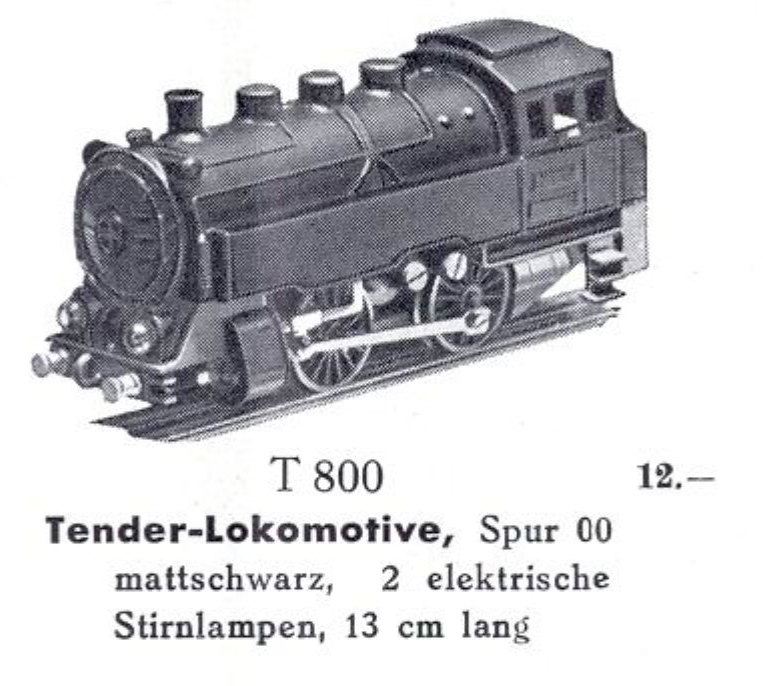 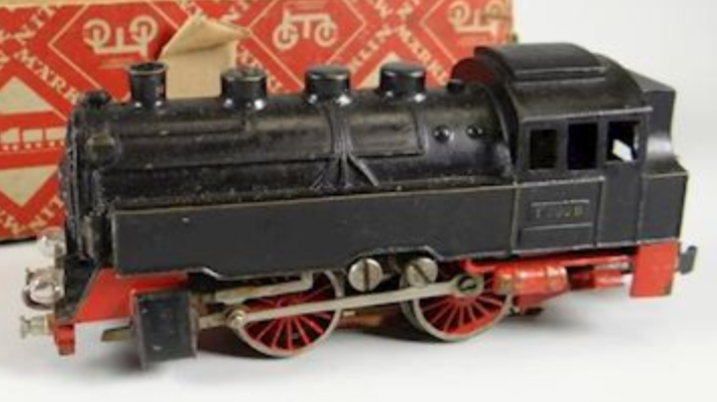 Prototypes in the large gauges have equal craftsmanship as the smaller 00/HO scale prototypes.  They too are built out of brass and sometimes regular tinplate.  They are not painted, most likely so that the pattern-maker could then accurately measure the dimensions of the metal without having any interference from the paint.  The primer, paint, and lacquer coats would have added millimeters to the measurements and Marklin probably did not tolerate such discrepancies! 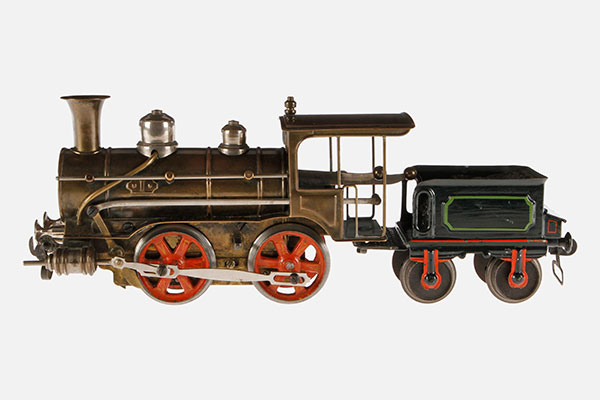 The prototype below is for one of the largest gauges of Marklin, Gauge II (or Spur 2 in German).  On the steam boiler side we can see the “II” insignia to denote the gauge.  The prototype is for the American market and is such even more rare.  The locomotive was acquired from the family of the original owner who procured the piece in Germany direct from Marklin.  In such a case the prototype was probably sent to America to be shown at a toy store to the American market.  Although it was probably never for sale it would show the fine quality of Marklin toys and trains to the American audience. (see correction below)

Correction/Update: several astute collectors noted that early large gauge Marklin locomotives could be ordered in brass, instead of the normal painted versions.  As such, the term “prototype” for these locomotives is not fitting because they could be ordered through the catalog.  They are, however, still rather difficult to find.

After additional research we also found the above Gauge 2 locomotive finally pictured in an advertisement flyer from FAO Schwarz (at the time commonly called Schwarz Toy Bazar).  The flyer is from 1901 and pictures the locomotive, without tender, available in Gauges 1 & 2.  Among other small details, the railing looping around the boiler as a single piece distinguishes this version from later ones.  The catalog photo does not show the locomotive outfitted for the American market, however, as is sometimes common.  The cowcatcher seen on the Gauge 2 locomotive above is in our opinion the earliest known cowcatcher – with thin soldered spokes. Later cowcatchers were made of a single piece of stamped tin. 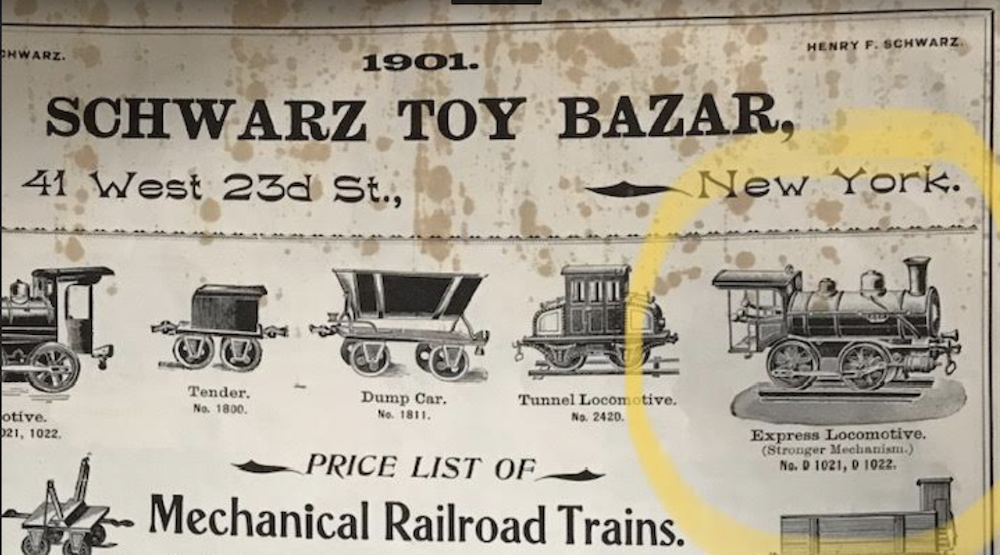 The Swiss crocodiles from Marklin are generally rare and sought after – and most rare in the 00/HO range is the first version (or 0.1) CCS 800 locomotive.  The locomotive was made in a very small production following WWII in 1947 for distribution to dealers around the world.  Although we cover crocodiles extensively in Marklin Crocodiles: Genealogy of the Swiss CCS 800 Locomotive we want to highlight the first series here specifically.

The first series CCS 800 is fairly similar to the second version, but there are several important differences to note.  First, and arguably easiest to notice, is the round screws on the pairs of linkages instead of the hex-pattern screws on later versions.  Because some unscrupulous collectors and dealers might switch out the hex screws for round ones, it’s important not to rely on this characteristic alone.  The paint is perhaps the most difficult but important to judge.  The paint on a first series CCS 800 is slightly lighter and more gray than a second series crocodile.

A myth recently circulated of an “American crocodile” that supposedly has red lights on each end and a black-painted buffer.  This myth originated in Europe and of course the best way to test its validity would be to analyze the American markets to see if ones has ever shown up there.  And of course, over the last several decades none have surfaced.  All first series from the US are just the same as those in Europe, so we believe with relatively high certainty that this “American crocodile” is a fantasy creation by a previous owner and not from Marklin originally.  In the photo above, however, we do see that some of the early version prototypes of the CCS in the Marklin museum do indeed have red lights on each end – the top light out of the three is red.

In the 1947 black and white catalog for the Swiss market, we also see this special crocodile described: 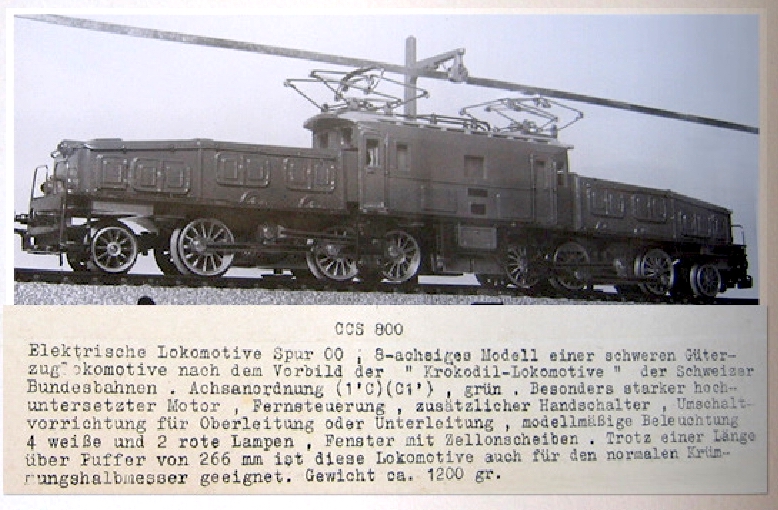 Of course, in a black and white photograph it’s difficult to tell whether the buffers are black or not.  We will leave that up to the viewer to decide for themselves, or wait until a confirmed original shows up on the market.  But from the photo we can certainly tell that this is a prototype, and distinct even from a First Version CCS 800.