Taking Flight with Marklin: A History of Toys with Wings

The era of aviation introduced adventure-seekers to the world of the sky.  Previously only  enjoyed by birds, the sky was now part of man’s domain – with a little help by some fantastic machines.  The first vehicles to hit the skies were powered by hot air, gas, and balloons.  One famous example is the Marklin Zeppelin airship.  The concept was simple: the air trapped inside the balloon heats up by way of a burner, making the air in the balloon less dense than the air outside.  Just as heat rises, so does the balloon!  Up until this point, Marklin toys traditionally traveled land and sea with trains, vehicles, boats, and submarines.  Aviation introduced a new playing field for youngsters – air!

The first Marklin toys to hit the skies not surprisingly didn’t have wings.  The hot air balloon concept was mechanically much easier to accomplish.  While hot gases, burners, and thin fabric balloons were potentially dangerous, the concept was much more simple than the power and precision required to get a winged vehicle off the ground.  Marklin produced a various Zeppelin-Airships and hot air blimps.  Some imitated realistic operation with propellers driven by a clockwork mechanism and could run along a string zip-line.  Two rollers affixed to the top of the zeppelin would allow the zeppelin to glide along the string.  The first Zeppelins from Marklin were produced in the early 1900s. 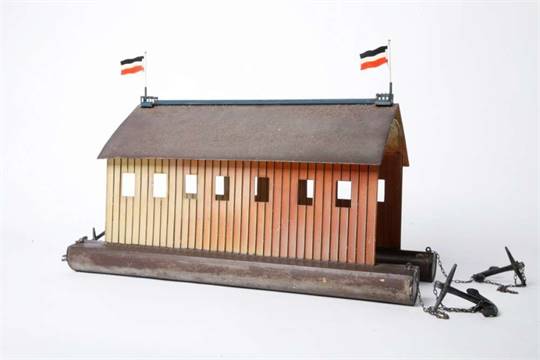 A very rare 1909 Airship Hangar for Zeppelins. It floats with pontoons, gangway and anchors.  This is the very long version and can take all the Märklin Zeppelins up to 18″ in length.  We can see the original floating hangar from 1900 this model was based on in the slideshow below.

Starting circa 1909 we have identified three different variations of the Marklin Zeppelin airship. A table shows the different versions and descriptions:

Later in the 1930s Marklin introduced the “Graf Zeppelin” airships.  While airplanes were certainly well into commercial existence, the prospect of luxury airships for civilian air travel seemed promising.  Zeppelin Airships were massive and featured smoking rooms, lavatories, dining rooms, sleeping cabins, fully functioning kitchens, and much more.  Airplanes of the day did not feature such luxuries and certainly were smaller and much more noisy than a giant balloon drifting through the air.  Unfortunately the crash of the LZ 129 Hindenburg in New Jersey in 1937 changed public opinion on the safety of such airships.  Newsreel coverage, photographs, and the recorded radio broadcast of the horrific crash shattered public confidence in airships.

To commemorate Marklin’s 140th anniversary, the company produced a special limited edition of the Graf Zeppelin.  The airship replica carried model number 11400. The model is silver metal with the following markings:  “D-LZ 130” in black, “Graf Zeppelin” in red on the body and “Marklin 1859-1999” and the company crest in black on the tail.  It is built to 1:600 scale and nearly 2 feet long. 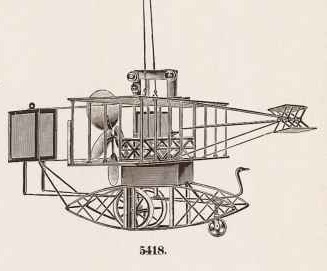 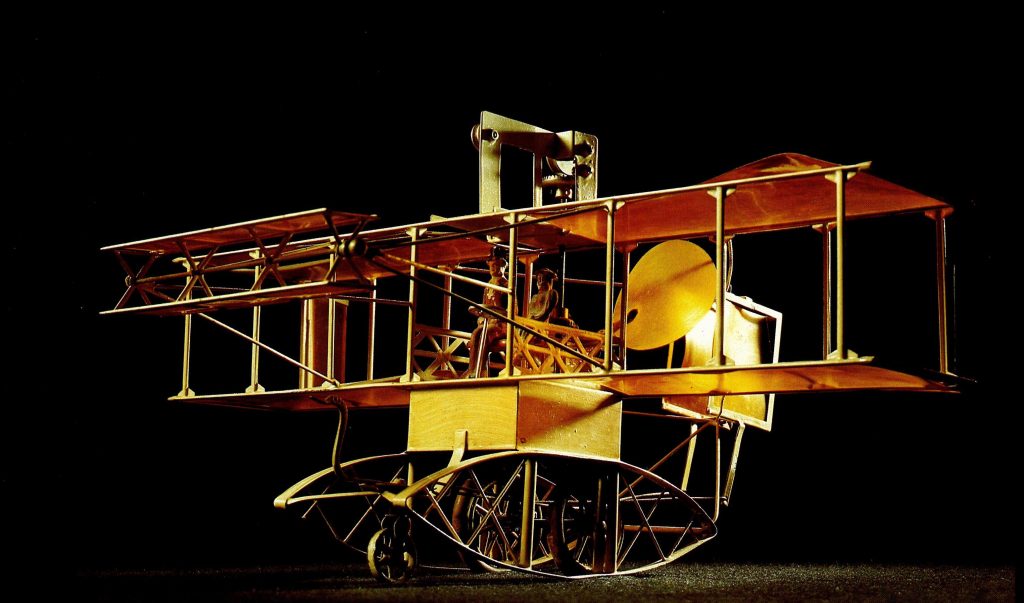 In 1930, Ernst Zindel and his team designed the JU 52 at the Junkers factory in Dessau, Germany. The aircraft’s corrugated duralumin metal skin strengthened the whole structure while keeping a low weight profile for the plane to carry additional cargo and passengers.  The airplane saw both military and civilian service during the 1930s and 1940s.

Marklin’s first prototype of this aircraft Junkers JU 52/53 was likely built before 1933 for an exhibition.  Photos of the prototype show the German national colors on the tail of the airplane along with “LUFTHANSA” lettering along the sides of the aircraft.  Later special prototypes and exhibition pieces featured the Nazi swastika insignia on the airplane tails.  These examples were thus likely produced post-1933 when the German parties transitioned power.  The below airplanes have a fantastic provenance coming from the Marklin family and were sold by Auktionshaus Hohenstaufen in Goppingen in a February 2017 auction fetching extraordinary prices. 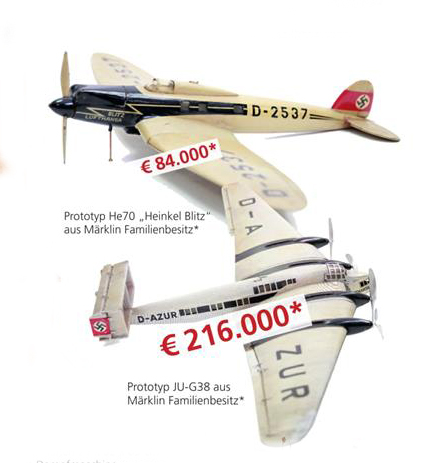 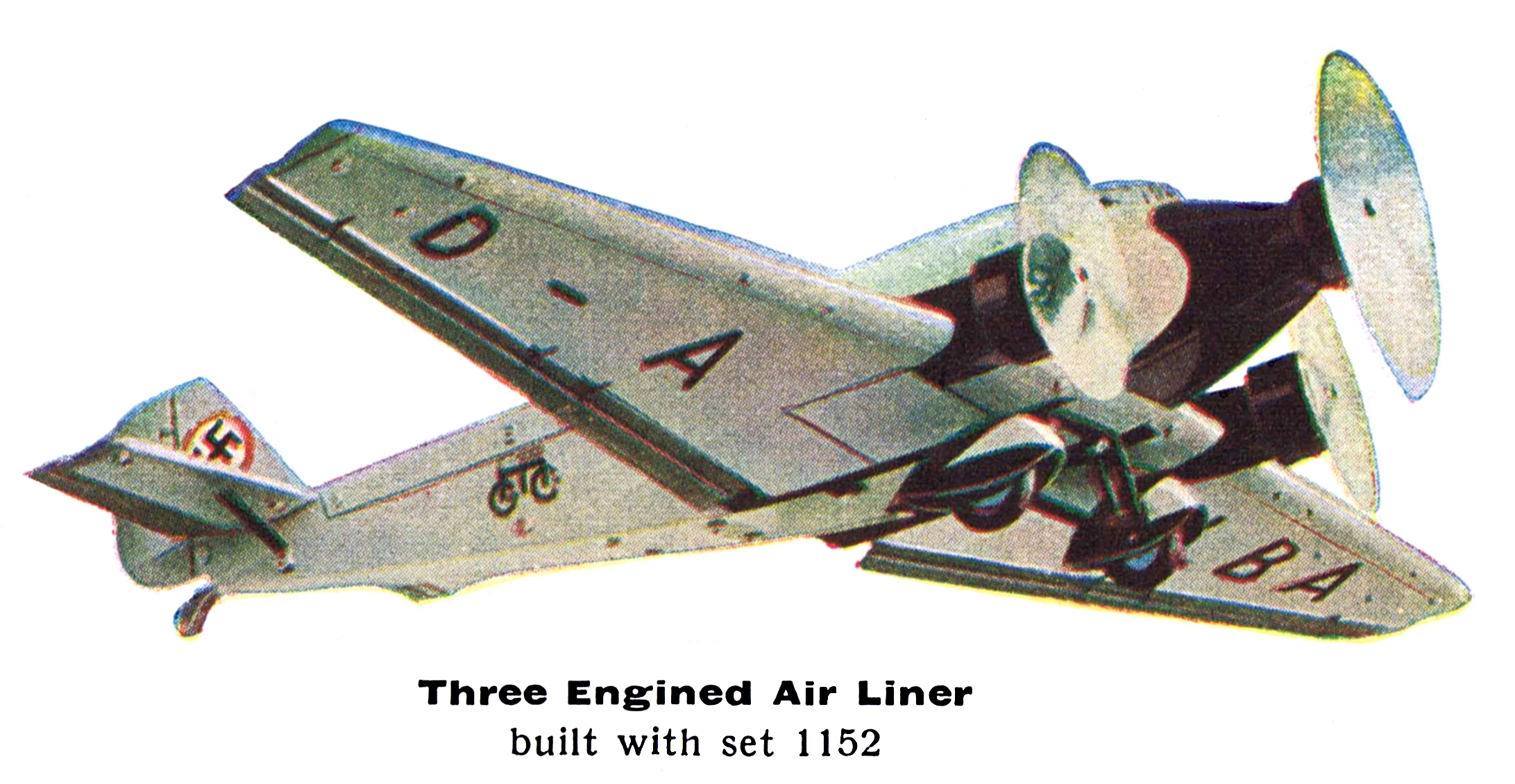