When Wilhelm Märklin established the firm Märklin in 1859, the main products included doll kitchens and other general metal toys.  It was not until 1891 that the first trains appeared in the assortment of their products.  Engine power was still in its infancy with floor-runners.  Soon however, Märklin started to produce powered locomotives for their trains.  Clock-work, steam, and even electric power were the main propulsion systems for the trains.  The makers of toy trains had to deal with overwhelming problems:

Electricity had arrived in many households in the late 1800s.  The electric power was distributed by many independent, often small, suppliers and varied from 220V, 110V alternating or direct current, to even three-phase current.

Toy train manufacturers had to provide the necessary electric power for their engines.  The electric motors for these engines were often rather large and cumbersome as the wiring for the field- and rotor magnets was cloth-insulted thin copper.  Transformer techniques were still in their infancy.  Needless to say all these factors posed significant problems for the manufacturers.  This article discusses how Märklin dealt with such problems over the years, until the arrival of their 00 (later H0) system.  The different power supplies for the track (batteries, transformers, rectifiers etc.) are not specifically discussed in this report.

Märklin introduced its first clockwork locomotives as early as 1891 in gauge 1, after having taken over the Lutz Company.  These locs had a simple clockwork mechanism.  When wound, they shot forwards and immediately derailed on the sharply curved track.  This could be prevented by hooking up some heavy cars.

Märklin improved the spring-driven clockwork system in 1910 by adding an ingenious “brake-system”, a regulator built in with the loc,  which consisted of a small cylinder or ring, containing spring-held brake-shoes pressing against the inside of the cylinder, which were gradually spring-released when the power of the mainspring decreased, thereby allowing the engine to run at approximately the same speed until the mainspring was unwound. 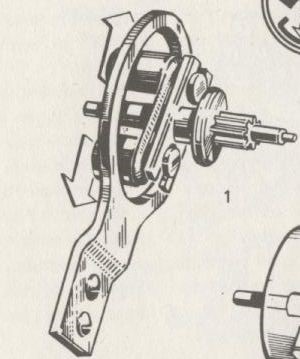 The clockwork mechanism had become stronger, allowing for longer running-time.  A special “Kraft-wagen”  (power-car) was added for gauge 1 in 1909.  This car could be run in the middle of longer trains and had its own clockwork to assist the locomotive in long, heavy hauls.

There were even clockwork engines that had two clockwork motors, first built in 1909.

In 1909 Märklin introduced clockwork engines in gauge 1 with headlights, the electric power was generated by means of a dynamo built into the engine. 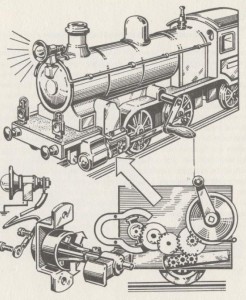 Märklin continued to produce clockwork engines until the very end of their gauge 0 assortment in 1954 with a simple 0-4-0 steam loc.

All other clockwork engines were taken off the production line around 1935 when electric engines and transformers were being built to perfection.

The first live steam driven engines, built as early as 1895, were “dribblers” as they continuously leaked water vapor from their cylinders.  Later engines had very sophisticated steam-engines as propulsion power, which were often heated by gas-burners.  The engines were built for gauges 1 and 0.  These beautiful models were produced until 1935 when electrical propulsion systems had become reliable and safe.

Electrical power was not introduced in most households in Germany until the early part of the 20th Century.

Even then, there was complete chaos in power supplied to the households as it was provided by many small independent suppliers, which supplied the households with 110V or 220V, AC or DC, or even 3-phase current.  Electricity was introduced in Göppingen (where the Märklin factory was located)  in 1900.  It was not until 1926 that household voltage became regulated.

For toy-train manufacturers this chaos posed significant challenges.  Besides, the development of transformers was still in its infancy.

In addition, the development of electric motors for toy trains had its own problems.  The copper wire used in the windings of field magnets and rotors had cloth winding as insulation.  This resulted in rather large electric motors.

To further complicate the development of these motors, it was customary to use the shell of the clockwork engine to save on extra expense and to build the electric motor inside the available space.

From the mid-thirties onward Märklin had developed good and reliable 20V transformers.  For that reason the need for clockwork- and steam engines diminished and new engine models were mostly produced as electric engines only.

These motors were powered by large batteries (“accu”), which was the only power readily available.  They were used in gauge 1 and gauge 0 engines. 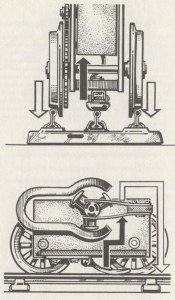 The advantage of these motors was of course the much longer running time of the engine, and the easy reversing by changing the polarity of the power.

The disadvantage of these motors was the low pulling power, less so than the live steam or clockwork engine.  In addition the power supply (battery) had a restricted lifespan.

High voltage (“Starkstrom”) electric motors were installed in existing loc shells used for clockwork between 1904 and 1926.  The size of these motors was dictated by the motor-frame distance (used for clockwork) in the existing engines.  This was by no means an easy task as the available wiring of the field magnet and rotor consisted of thin copper wire covered in cloth wire for insulation, resulting in a rather voluminous motor.

That meant some, often strange looking, adaptations in the engine to accommodate the larger electric motor. 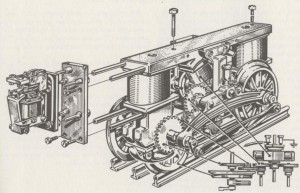 Electric power was derived from the existing 110 or 220V household current, with light bulbs to reduce the voltage to approximately 50V.  When derailments occurred (or even when the power was turned off) the full 220V could be on the track. 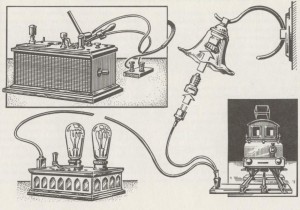 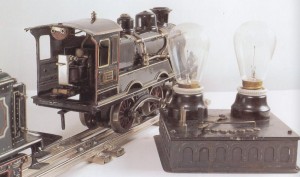 The newly formed Electrical Regulatory System (VDE) prohibited the use of these dangerous techniques in 1926.  From that time onward the engines had only 20V AC or DC electric motors.

REVERSING OF THE ENGINES

Märklin introduced their first 20V AC electric engines in 1927 with at first only a hand-reverse.

Reversing for an AC motor is more complicated than for a DC motor.  The reversing can only be accomplished through the rotor-brushes, not through the field magnet.

Transformers were developed that reduced the current to a safe 20V.

The 20V 0-gauge engines had mostly AC motors.  These motors could run on either AC or DC power. 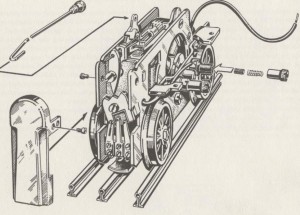 The remote reversing unit could be deactivated by fastening the direction of travel with a reversing rod which protruded from the back of the engine.

Märklin introduced a DC motor in their 0-gauge (and 00 gauge) engines in 1935.  These engines had no hand-reversing lever.  Reversing with the so-called “70/-reversing” (Ideal- or Perfect Schaltung) was accomplished with two rectifiers: one between the transformer and the track, the other rectifier was built into the engine. 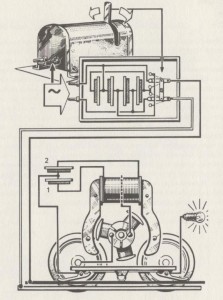 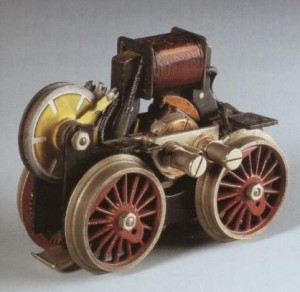 The quality of the rectifiers was not very high due to the use of poor materials, as higher quality material was needed for the WWII war effort and the rectifiers often started to smell.  The competition mockingly referred to these rectifiers (in German:  Gleichrichter) as “Gleich riecht er”, meaning “he smells right away”. 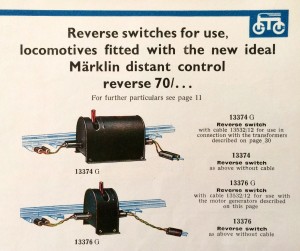 Reversing of the AC motor in Märklin’s H0 gauge engines is accomplished by having two counter-wound windings in the field magnet.  A separate reversing unit with a built-in electromagnet switches the power by means of a higher voltage burst which activates a finger to switch the power from one winding to the other, thereby reversing the direction of the engine  (the Perfect-Schaltung 800). 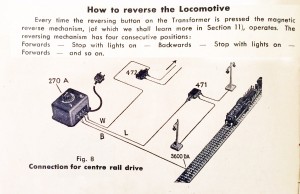 00 reversing with 270A transformer;
800 Instructions for the electric miniature railway

Further discussion on the engine power in Märklin’s H0 line is omitted in this report.

IDENTIFICATION OF THE ELECTRIC ENGINE POWER IN THE ENGINE

Many engines from the 1930s have a small metal placard with “B” inscribed on the side of the cab.  This “B” is a recommendation from Marklin of what transformer to use.  A locomotive that has a “20 Volt B” placard can be run, for instance, with the 13470 B transformer.

These engines had no manual reversing rod.

The following textbooks were consulted for this study: