The year 1935 brought several additions to the Marklin product range. Several cars under the “Miniatur-Autos” line were introduced for the first time as beautifully Zinc die-cast cars with rubber wheels and moving axles. The 1935/1936 main customer catalog offered a package of these cars numbered 5521 G/6 which included each of the non-clockwork cars that were released during that year. The base number 5521 would be the model number of many of the Marklin die-cast cars for years to come. The expanded product range in 1938/1939 brought a 8021 series which was for military vehicles and accessories. Such military vehicles included an 8021/1 camouflage tank and the 8021/14 G military persons transport vehicle. The inclusion of the letter “G” seems to indicate that the vehicle / motorcycle includes figures with the item, however, the 5521 G/6 package of 6 cars without figures is an exception.

Items from Marklin Rennbahn series are highly sought by collectors because they were only produced for a limited number of years and they were part of a very novel product line for Marklin. Sure Marklin produced tinplate vehicles and limousines since the turn of the century, but never had they made electric race car sets before that could run around on a slot track.  A brief overview of the product range for the Marklin Rennbahn system can be seen below:

The very nature of the Marklin “Miniatur-Autos” and the Rennbahn lends itself to an incredible array of promotional displays and layouts.  Since the vehicle toys were especially distinct from the Marklin trains of the period, they had to be cleverly incorporated into the Marklin dealer and toy fair promotions.  Much like the “elevated railway” and “rack railway” systems of the early 1900s, the new “Rennbahn” slot-racing cars would travel around the landscape of the main layout.  The display layout below “HIGHWAY-SHOWPIECE” of 1934 was probably the first layout to incorporate the Marklin Rennbahn into a well-designed layout.  The highway theme is supported by the inclusion of  an O-Gauge accessory, the 2620 B “Tankstelle.”  Although this piece was not intentionally built for the Rennbahn system, it goes well with the highway theme despite being in a proportionally smaller scale.

The following year in 1935 a wonderful dealer layout probably custom built for select dealers who requested them can be found.  The layout features what looks like two independent Rennbahn tracks with two cars on each (can you spot all four cars?).   The two white cars with model number 13301 (in white, number “7” on the side) take the high track in the mountains while the two red cars also with model number 13301 (but numbered “5” on the side) take the tunnel route. 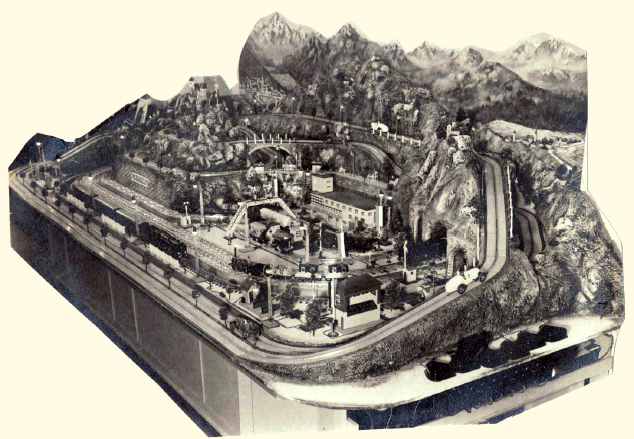 Marklin 1935 Display with Adler and Rennbahn

Several other aspects of the above layout are also important to note.  The layout features a wonderful assortment of trains including the historic “ADLERZUG” and also a locomotive which looks something like a TCE or TK variant which does not have a coal tender.  Among many custom built buildings and layout accessories, an incredibly famous piece can be spotted mid-mountain just under the Rennbahn bridge:  the majestic “MARKLIN VILLA.”  Perhaps in a future article this incredible piece will be more fully discussed, but it is important to note that we can see this building as early as 1935.  The villa is more commonly seen on the layout 700/210 from 00 catalog of 1936, but here we can see that it is possible the building was first made in 1935.  An even more important question is to consider what is around the villa.  One can spot what looks like two flags.  Perhaps they are the HK-Fahne 406?  It is very hard to say, but it is quite possible.  A black dot (presumably an HK-symbol) on a white circle can be made out against a dark rectangular background which is very characteristic of such flags.  The flag on the right is possibly turned away from the viewer, but nonetheless, the flags seem out of proportion because they look a little taller than the later released 406 Fahne.  Perhaps they care custom-made flags produced before the full-production ones. 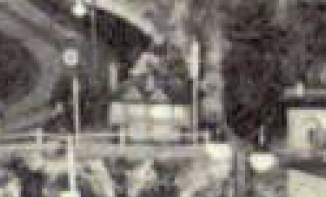 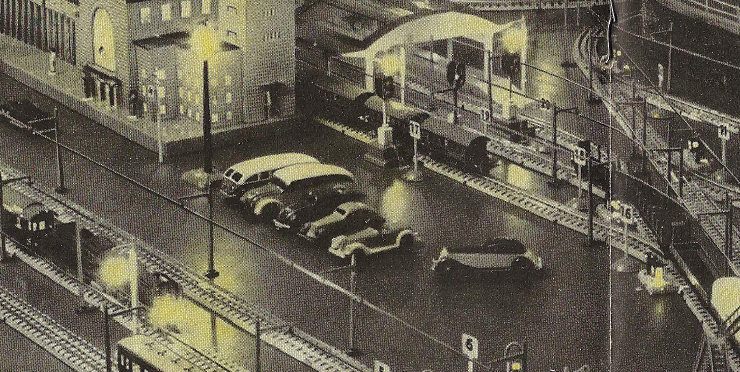 Transitioning to a time in which large dealer displays and layouts were less common as in the 1930s and 1940s, the small display pieces for individual dealers to purchase become much more common.  Displays with rotating wheels, lights, and many moving components were quite common in Marklin dealer display accessories of the 1950s.  Each of the displays below are from dealer display catalogs from which dealers can order display items to set up in their store to display the Marklin products.  Note that these items are not produced by Marklin in whole.  During the 1950s and possibly during other years, Marklin contracted out its advertising and display materials to various graphic and display companies across Germany.  Some pieces, however, are incorporated from the Marklin production line including the metal erector set pieces from the 1954 rotating display and the lamp lights from the 1955 display. 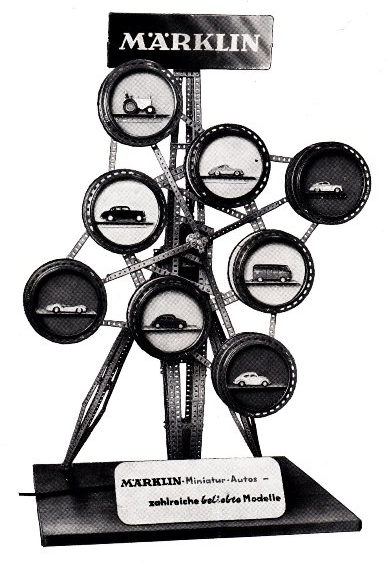 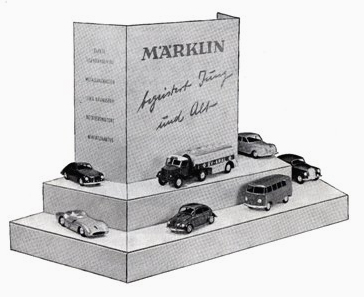 Decline of the Rennbahn and the die-cast vehicles

It is often questioned why the Marklin Rennbahn was discontinued and did not again appear after the war, but it probably follows the same story as what happened to the O Gauge production in the post-war years.  Marklin was moving towards a miniature railway system which could be highly expandable and also be built on a small budget.  The 1930s Rennbahn system produced by Marklin was proportionally large and would not seem to go well on an 00/HO scale layout.  It also did not have much room for expansion as Marklin did not produce many accessories for it (as can be seen from the Rennbahn layouts in which accessories are either custom-built or borrowed from the O Gauge production line).  It is no surprise, then, that the Rennbahn was not continued after the war and only later reappeared in the 1960s under the Marklin SPRINT line.   The smaller die-cast cars of the pre-war years reappeared in the post-war years in the 1950s, but were produced in a much different matter.  Instead of the very expensive and difficult Zinc die-casting process as in the pre-war years, the newer 1950s cars were mostly produced by using plastic injection molds.