By 1938, the Marklin’s 00 Scale was already well established with the 700 series locomotives and train and was ripe for technological improvements. One of these improvements would be found in the reversing system of the locomotives. The locomotives of 1938 were equipped with the “Perfect-Reverse” system which allowed for remote reversing without the need of a separate devise. The 280 A transformer had a small red button on it which, when pushed, would change the direction of the locomotive. The 800 series reversing a system is shown below: 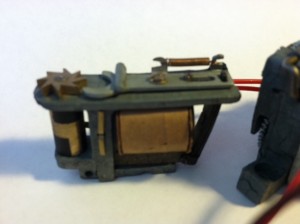 The ingenious use of an electromagnet cleverly reverse the direction of the locomotive by use of a cylindrical device with contacts on it which changes the direction of the current. The electromagnet is concomitant under village when the locomotive is running put only moves the cylinder when the voltages exceed approximately 18 volts. A hand reversing switch is also located in the rear of all 800 series locomotives. The motor housing and hand reversing lever are shown here: 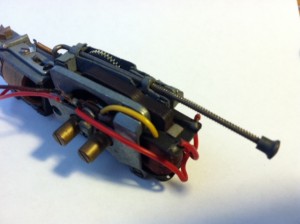 Along with changes to the internal reversing components, the chassis frames were altered dramatically to make room for the new reversing system. While the frames of the 700 series locomotives integrated the gears and motor housing all into one, the 800 series made it separate.

The boxes from 1938 – 1943 also looked much different from their predecessors. The boxes now featured a pattern design with Marklin’s “bicycle” logo and the stylized Marklin text. This Commonly featured an orange and white label for the locomotives and a white label for the passenger cars.  See the Guide to Boxes for more information.

The year 1938 also marked a new series of export models.  800-Series models such as the HR 800 LMS and the SLR 800 LNER were German outline locomotives painted in British livery (either LMS or LNER).  The first locomotive produced strictly for an export market was also introduced, the infamous E 800 LMS.  Today this locomotive is highly sought after by many collectors because the locomotive was only available to customers of Great Britain.  Other trains like the 342 and 343 Speisewagen and Schlafwagen cars were overpainted for the British market and market “LMS” above the 342 or 343 inscriptions.  Such cars are also good indicators of the different couplers Marklin used during the years of 1937 and 1938 (the years the 342 E LMS was produced).  Below, a picture of two 342 E LMS cars; one with nickel-plated claw coupler of 1938 and the other with a black claw coupler of 1937.   In addition to having different couplers, the two 342 E LMS cars from different years are quite distinguishable from each other despite being just one year apart. 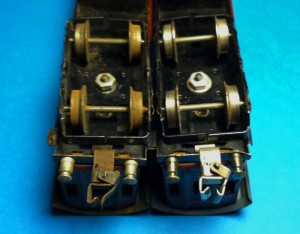 Comparison of couplers of 342 E LMS 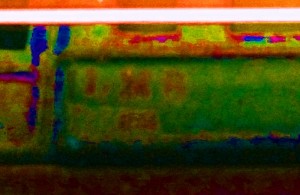 Using special equipment, we can see the overpainting of the 342 coach to become the special 342 E LMS

It is also very important to note the differences not only technological improvements within the time period 1938 – 1943 (700 series to 800 series), but also its contrast between the next time period known as “Postwar.”  Here I will explain the common production methods of the lat 1930s (Prewar) in contrast with materials produced directly after the war (Postwar).  It is important to note, however, that these changes occurred gradually.  Some of the items which are described as “Postwar” are actually from 1945 because Marklin commonly used Prewar leftovers.  Here some examples of Prewar / Postwar production methods in the transitional phase: 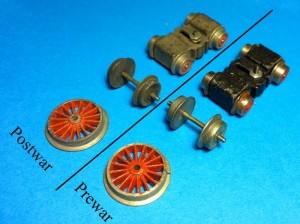 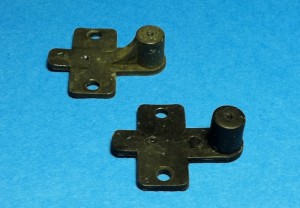 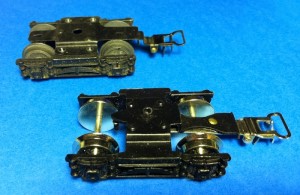 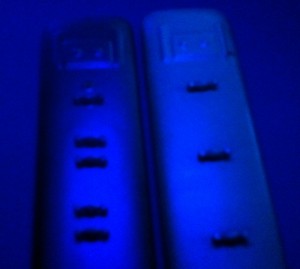 Many of the Marklin items used above such as the pre-war roof pre-war SK 800 truck were actually found in an SK 851 set from 1945.  The bruniert version of the SK 800 distributed for American GIs often contained pre-war parts such as the front truck support and front/rear trucks.  The metal wheels also resembled pre-war ones.   The  set also included 4 of the 350 series cars all from 1945.  Two of these cars are the 353 and 351 cars whose roofs are pictured above.  Interesting to see that one is pre-war and one is post-war yet they were both sold after the war in 1945.