Fakes, Forgeries, and Reproductions: How do they affect Marklin? 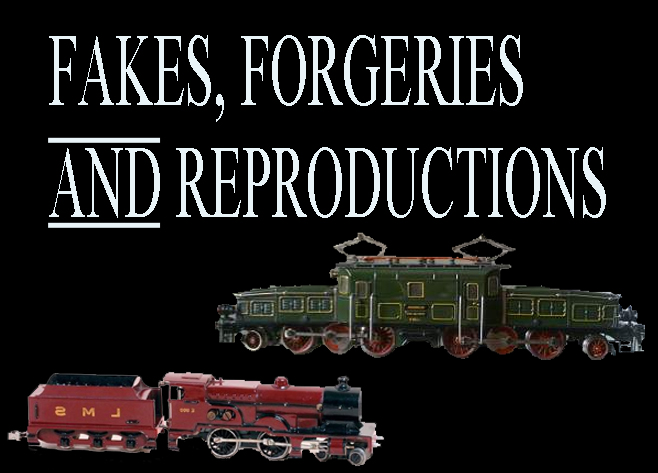 Fakes, forgeries, and reproductions of Marklin trains and toys create an obstacle for Marklin collectors, dealers, musuems, and auction houses. In this article I will discuss the implications they have on the current market for Marklin items and the possible future effects. First, it is important to devise some operational definitions:

As can be seen from the above definitions, it is extremely important to look at how the item is described when it is sold. Selling an E 800 LMS locomotive as an original and selling one as a reproduction are two entirely different circumstances and have equally different effects on the market. In order to attempt to get a better understanding of such market effects, we will take the E 800 LMS locomotive as our example; it is a suitable example because it was originally produced in 1938 in relatively small quantities and is extremely sought after in the collector market. It’s relatively low supply and high collector demand has created the need for quality reproductions. Ritter restorations filled this need by producing a reproduction of the E 800 LMS as well as some British version passenger cars.

A Hypothetical Market for the E 800 LMS

Let’s now create a highly simplified situation in which we shrink down the size of the Marklin world to just 6 collectors, 1 known original E 800 LMS locomotives, 34 E 800 LMS reproductions, 0 E 800 LMS fakes, and 1 E 800 LMS forgeries. This will help us consider the possible effects of fakes, forgeries, and reproductions on the market for Marklin. Empirical research is near impossible in any other scenario because the market is fraught with clandestine transactions and deceit and, as such, it would be very difficult to asses the market correctly. This hypothetical thought experiment is in no way economically or experimentally sound. The conclusions are not drawn based on the “results” of the experiment, but by what seems to be important to the market for Marklin. The experiment has the sole purpose of exposing what exactly influences the market for original and reproduction Marklin trains. Here is a representation of our small, hypothetical Marklin world:

Collector Y realizes he will never be able to afford an original E 800 LMS unless he starts making forgeries (which he can do because of his expert knowledge). He creates a forgery and offers it to Collector Z. Collector Z, convinced by Collector Y that the E 800 LMS is original, buys it for $2,500 thinking he has just scored a great deal. He doesn’t realize it is a forgery because of his below average knowledge. Collector Y is very proud of himself that he was able to imitate the impeccable quality of Marklin trains and was able to pass off his creation as original E 800 LMS. Collector Z, now with an E 800 LMS forgery, is out from the market for an E 800 LMS.

Here is the market directly after the auction and the “private transaction”:

Collector A – out of the market, owns a reproduction

Collector B – Still in the market, will bid high at the next auction

Collector C – Still in the market

Collector X – out of the market, owns an original

Collector Y – possibly in the market now that he has enough money to buy an original from the sale of his forgery. It is possible that he will make a forgery for himself, but seeing that he is an “expert,” he will probably only accept an original for himself.

Now this hypothetical scenario could go on forever, revealing all the different aspects of what happens when originals, fakes, forgeries, and reproductions are introduced to the market for a single E 800 LMS, but just from a few events (an auction of an original, the sale of a forgery, and the sale of a reproduction), a lot can be learned. Let’s analyze each event:

As can be seen from the above analysis, the effect of each event depends upon a number of factors and cannot be exactly correlated with a quantifiable effect of, say, the sale of a single forgery. The most important factor in each scenario is not the budget of each collector, but rather his or her knowledge, which in some ways limits the budget. An expert collector would not be as willing to spend $2,500 on a forged E 800 LMS than a below average collector who cannot tell the difference.

In many markets, forgeries can cripple the market because collectors (even experienced ones) cannot tell the difference between an original and a forgery. However, such tendencies cannot be applied to all markets – what if the collector does not care if he has purchased a forgery because he cannot even tell the difference. As such, the introduction of forgeries is different for each and every market. Reproductions are assumed to not have this same effect because by our definition, they are always sold as reproductions and not originals.

The idea of a fake, which has been previously left out of our hypothetical world, is thought to have a similar effect as a forgery but to a lesser extent. The problem with fakes, however, is that they literally blur the line between a forgery and an original since, by definition, they have parts from both. Like a forgery, they create value in a market (original Marklin trains) out of materials that come from outside the market (Zinc metal, machining labor, etc.). However, since some parts of the fake are original, they create less additional value than a complete forgery and are therefore less “harmful” to a market.

Luckily, at this point in time for the market for Marklin trains, there is less of a demand for fakes, forgeries, and reproductions because Marklin collectors place an extreme value on original trains that have substantial provenance. Any faked or forged trains that come up for sale are usually of very poor quality and can be identified by the average collector. Reproduction trains are generally well regulated and modified so that they can easily be identified by any Marklin collector with a general experience in collecting vintage Marklin. In future years, however, a high demand for fakes and forgeries might be created by ever-increasing prices for original Marklin trains. With this increase in demand, however, there is also an increase in an equal, but opposite demand for highly reputable dealers who are known for selling 100% originals who Marklin collectors come to trust. In the end, it is a constant battle between the forgers and the advanced Marklin collectors who are capable of identifying these forgeries.