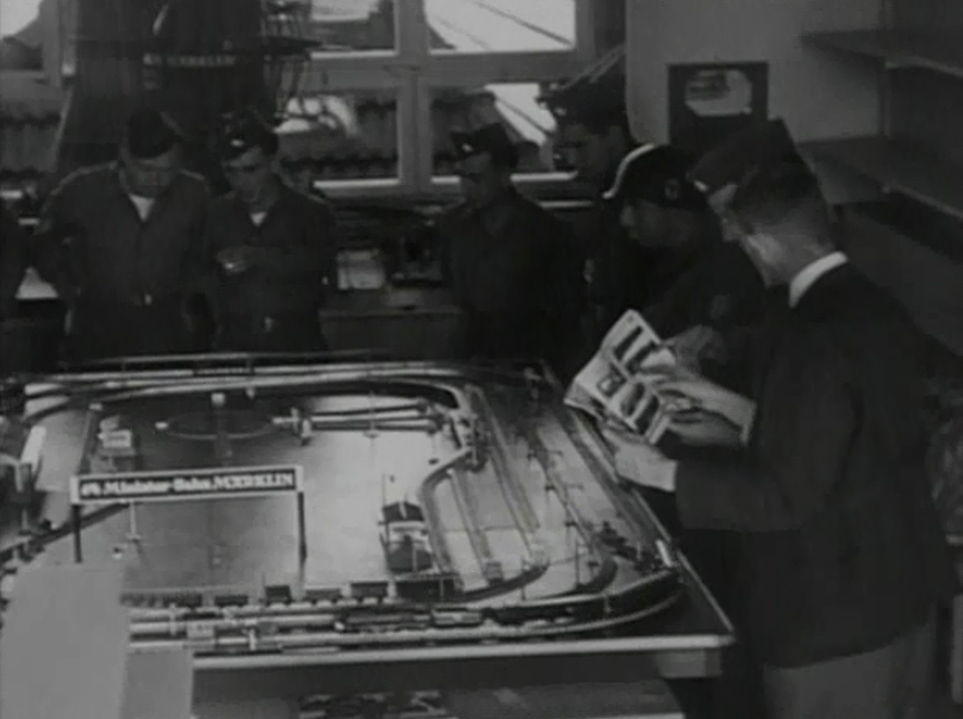 Märklin has survived several generations of ownership, three factory relocations, eight gauges of toy trains, and two world wars, but the most crucial and undoubtedly pivotal time was during World War II.  With its introduction of 00 Scale in 1935, Märklin faced huge potential; the smaller scale required fewer raw materials and the dream of creating an expansive model railroad complete with stations, bridges and track accessories was realized for many hobbyists. The range of 00 Scale production expanded at a quickening pace:  the SLR 700 in 1936, the HR 700 and HS 700 locomotives in 1937, the CCS 700 prototype in 1938, and the “Perfekt” reverse system of the 800 series in 1938.  These models were also offered to export markets and sometimes detailed with special paint schemes or additions.  In 1937 and 1938, export models were sent to Great Britain and were painted in the LMS and LNER livery.

Despite its rapid progress, Märklin foresaw the early warning signs of a war.  The last full-release customer catalog was produced in 1940 and contained no new models.  The dream of a 00 scale crocodile was never realized and the CCS 700 prototype was put off until the postwar years.  But Märklin’s pre-war wariness did not show weakness or hesitation, it showed genius.  By not expanding its product range, Märklin vouchsafed a steady flow of revenue during WWII by producing models that had not changed much since 1938.  This required far less materials and technical complexity of the later “Super-Modelle” series from the immediate postwar production. 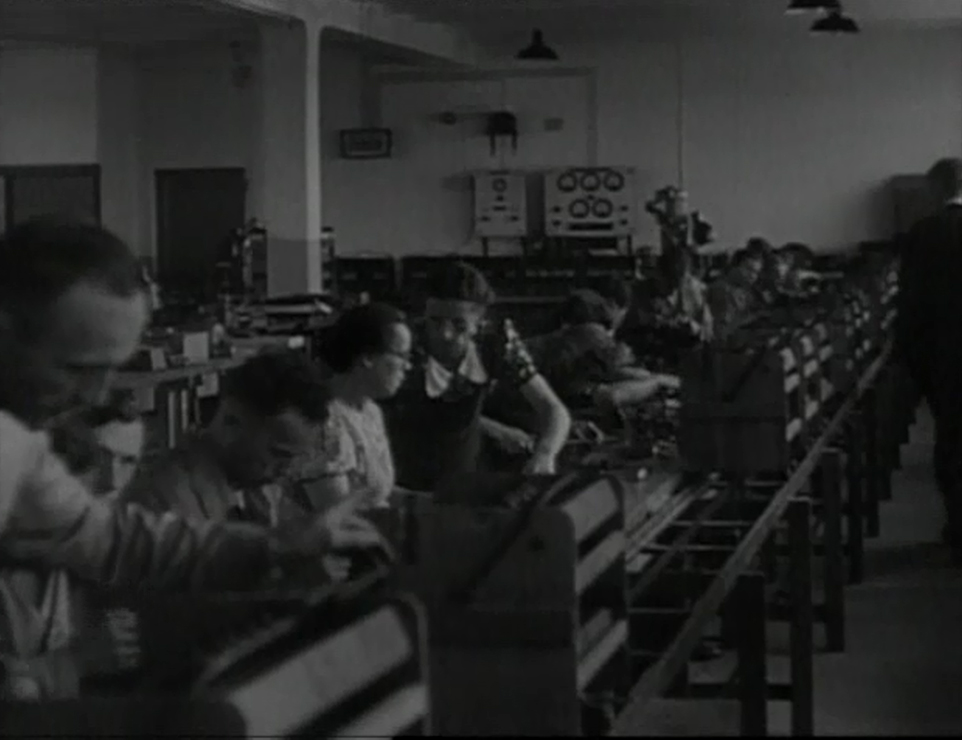 During the course of the war, Märklin maintained a difficult balance of the production of war materials and toys all the way up to early 1943 when the production of toys ceased.   Märklin had the task of producing the Entlastungzunder 44 (E.Z. 44), a device commonly used to prevent the removal of mines which would detonate when lifted.  These pressure-lifting devices required special fuses, springs, and clockwork mechanisms.  Märklin’s penchant for producing precision technical toys suited them perfectly for this task.  Although Märklin is known as the primary producer of the E.Z. 44, some examples have been found with a marking which is believed to be that of Shuco, a German toy manufacturer.

During World War II, the Werhmacht assigned production codes to factories that aided the war effort.   Märklin carried the production code “BKG” on the Werhmacht production list.  Similarly, Fleischmann and Wiking had their own Werhmacht production codes, “BZF” and “BXY” respectively.  These production codes would be stamped on crates or engraved into metal goods.  Märklin also produced other technical instruments and machined parts for the war effort including detonators, belt buckles, torpedo motors, and aircraft instruments.  One account from a U.S. Army intelligence officer who visited the factory towards the end of the war states that these war materials were produced in a special section of the Märklin factory located on the lower floors concealed behind a single, unmarked door.  When the American officer visited the Märklin factory to gather intelligence, he was given a complete set of Märklin trains including the 351 F “Fuhrer” wagon, a seemingly controversial gift of the time.

U.S. Soldiers observe layout in the Märklin factory showroom and browse a pre-war catalog with a Märklin salesman.

In addition to its forced production of war materials to support the war effort, Märklin also protected itself from the unstable and violent political climate of the time.  Although no records point to a formal affiliation between Märklin and the Nazi party, Märklin did produce articles which portrayed the symbol of the German socialist party.  These items include the 351 F with two Nazi eagles affixed to the coach’s sides, the 5521/10 Mercedes Fuhrer car, the 00 Scale 406 Nazi flag, and the large-gauge 2611 H Nazi flag.  Only one of these items is pictured in Märklin’s customer catalogs and only some of the others can be found in supplemental catalogs.  Compared to other toy companies in Germany during WWII, Märklin’s production of toys which included the Nazi symbol was extremely minimal and on a very small-scale.

When war production stopped, Märklin still had over 700 employees and restarted production of toy trains to be sold in 1945.  Although the city of Goppingen was relatively protected because it was a Red Cross camp, it still faced involvement in the war simply because of its many factories and railway centers.  On April 12, 1945 the 9th Air Force escorted by the 95th Air Force bombed a marshalling yard at Goppingen, crippling railroads in the area.  Weeks later, over 1,200 8th Air Force “Forts and Libs” (Fortresses and Liberators) flew to Southern Germany to destroy rail centers in the towns of Hellbronn, Bruschsal and Goppingen.  Although some sources say that Goppingen was untouched by these bombings, it is difficult to determine the outcomes of these bombing raids.

Due to the stress of the war, production dropped from a pre-war average of 65,000 trains to an average of 25,000 trains per year during World War II.  The main source of revenue for Märklin during the wartime was the domestic sale of pre-war trains that continued production into the early years of the war.  Towards the end of Nazi occupation in Europe, trains were also sold through special PX-shops located throughout Europe which offered Märklin miniature railway sets for sale to American GIs and local civilians.  Several PX sets were offered in late 1945 including the SK 841/4, SK 851/4, HR 841/4, HR 851/4, and RS 827 which were all sold in either red set boxes similar to the pre-war versions or a special “PX Box,” a plain brown box with “110 Volts” stamped on the front for American export.  These train sets were sometimes shipped to the United States in wooden crates via the military postal service.  The SK 800 locomotives sold during this time were a special “bruniert” type, unique because of their burnished black finish. These sets also have a distinctive “PX track” because in Nurnberg, the factory that printed roadbed designs on the 00 Scale Märklin tracks was destroyed during a bombing.  For this reason, tracks that were sold during wartime and the immediate postwar period are either leftover pre-war tracks or tracks without a printed roadbed.   The instruction sheets included in these sets, “Instructions for the Electric Miniature Railway Gauge 00,” are commonly found with print code “A 0845 r,” denoting a print date of August, 1945. 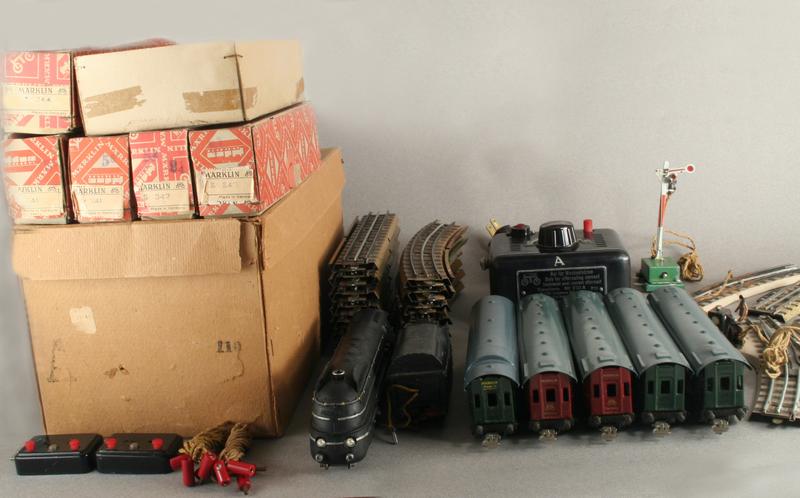 An SK 841 PX-set marked 11/1945 which was sold to an American soldier stationed in Germany.

Märklin’s production of toys was so important to Germany that in late 1945 the “Welt Im Film” (World in Film) news crew filmed the Märklin factory and showed its incredible postwar success.  The segment was called “Göppingen: Eine Friedliche Industrie” (Goppingen: A Peaceful Industry) and portrayed the remarkable strength of the Märklin factory.  The newsreel shows several key aspects of the factory including the main production floor, the factory showroom with several American soldiers running locomotives on a layout, and the humble beginnings of the Märklin museum displays.

Märklin had survived the war and found itself in the perfect position for the 1947 introduction of the “Super-Modelle” series which had been a dream since the early pre-war CCS 700 prototype of 1938.  American soldiers stationed in Germany for the rebuilding of the country were delighted to see locomotives of the “Super-Modelle” series based on American designs like the electric DL 800 locomotive.  Märklin’s inclusion of such American models could possibly be seen as recognition of the important role which American soldiers played in Märklin’s survival during WWII.