Richard Maerklin Toys, located in New York from the mid 1920s to the late 1930s, is the paragon of Marklin’s international trade prowess.  Despite its importance, there is little known information on the operation of the toy store in New York and its crucial role as an importer of Marklin for the US.  I can safely say this because after several years of collecting, I have only seen one or two mentions of RMT (Richard Maerklin Toys) and their descriptions were rather ambiguous and unsubstantiated.  This articles aims to clear up some of the confusion behind RMT. All of the research presented in this article comes from an archive of the operations of RMT recovered from a New York estate after 60 years of storage. These archives have vouchsafed an impeccable look into how Richard Maerklin ran his store and created a Maerklin legend.

Who was Richard Märklin?

Before we go into a discussion on RMT and its success in the 1920s and 1930s, I would first like to briefly describe some background information on Mr. Richard Marklin.

After searching through dozens of ship’s manifests from the late 1920s, I stumbled upon a record of the S.S. Berengaria which sailed from Southampton, UK to New York, USA on the first of October, 1927.  “Richard Marklin” was a single, male engineer from Goppingen at 30 years of age.  He was the only son of Eugen Marklin (1861-1947) and was therefore a direct descendant of the Marklin lineage.  His Immigration Visa was issued in Stuttgart on September 7, 1927.  This was Richard’s first trip to the USA and other ship records note that he went back to Germany and later returned, but this time sailing on the S.S. Cleveland from Hamburg on January 9, 1929 with a visa acquired again through Stuttgart on November 23, 1928.  This confirms previous statements that he began selling in 1928 (although not for the full year because of his travels).

Setting up Shop in the “Big Apple”

Now that we know a little more about the background behind Richard Marklin, we can move on to present some information that is not already known.  What I am about to reveal allows us to take a look into Richard’s position as the owner and founder of a major toy store in the US, specifically his role as an importer of one of the greatest toy manufactures ever known.  It all begins with a look into a simple, plain brown folder labeled in classic 1930s cursive “Ausverkaufs Liste ~ 1930.”

Inside this mysterious brown folder resided for over 60 years several letters from Marklin (4/5/30 and 4/14/30), a six page Ausverkaufsliste from July 1930, and a smaller half-sheet letter from Marklin dated August 18, 1930.  What was even more fascinating was that this brown folder was not actually a folder, but rather a special catalog with very crude printings of some 1930s models in production.  Rather than being simply trains (although there are some trains pictured for the US market), there were pictures of clocks, a toy gun, cooking stoves, spinning tops, watering cans, carriages, steam engines, and even more.  All of the model numbers and prices (in US dollars) are hand written in beautiful cursive.  Surely these catalogs did not go out to all of Marklin’s dealers because they would have simply been type printed if that was the case. 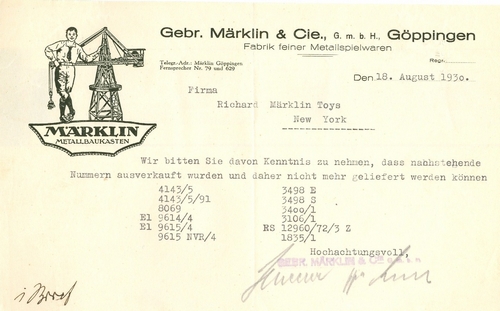 Unfortunately not everything is so easy to decipher and explain: I have no idea why the logo for Marklin is “Marklin Metallbaukasten” because that was just one of the toy lines Marklin produced in the 1930s.  The writing in German states, “Wir bitten Sie davon Kenntnis zu nehmen, dass nachstehende Nummern ausverkauft wurden und daher nicht mehr geliefert werden können” which roughly translates (I am no German linguist!) “We are pleased to take note that the following numbers (article numbers) are sold out and therefore cannot be delivered.”  The two letters below also alerted Richard Marklin of the items that were sold out for that year or perhaps these were monthly notices or even by season.

What continues to baffle me is the question, “Why would Marklin produce a ‘sold-out’ list and even a catalog?”  It is almost like Marklin is sending this catalog as “Oh, here is everything that we have, and by the way, it is all sold-out.”  In the past I have seen many of Marklin’s catalogs and other printed materials including “zusatz” catalogs, neuheiten catalogs, supplemental catalogs in the 1940s and 1950s, and even dealer pricelists and order forms, but never have I seen a “sold-out list.”  Seems strange to me especially since a simple list would be sufficient in alerting Richard of what items were not available. The list below (which is a sort of hybrid pricelist) adds to the confusion.  It states that it is a “Sold-Out List for Spring of 1930.”   This list states the model number, new price (for US dollars – which Richard sold), old price (items for sale in Germany) and even “Vorrat” which means “Quantity.”  I am unsure of what this actually means; however, because how can there be a quantity for something that is sold out?!?  The numbers have been blurred for privacy as I know Marklin wished to never release their production run numbers and I have no idea if these numbers could possibly give away some of this information. 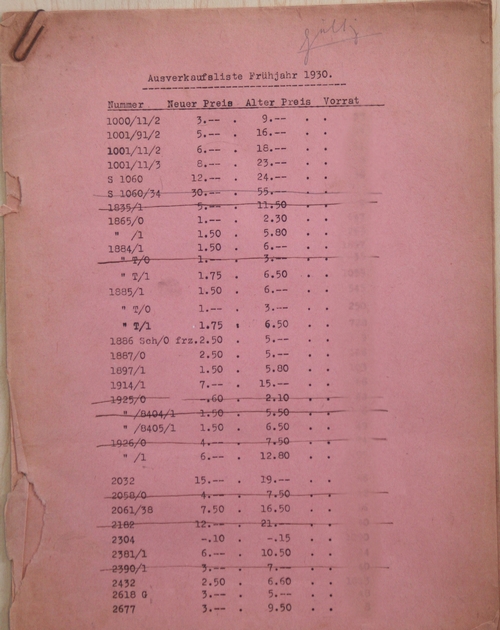 To finish our story (more of a puzzle) of Richard Marklin, I would like to applaud Mr. Marklin for his brilliant marketing abilities. It seems that he was able to get two ads (as far as I know) in both Popular Science and Popular Mechanics, but unfortunately to his chagrin, these were at the end of his career in 1936 and 1939.  It is uncertain what his role was in the Marklin business after the Second World War, but a picture of him can be seen in 1959 at the Marklin 100 year anniversary.  It is also uncertain when he died as I could not find any records on his death. 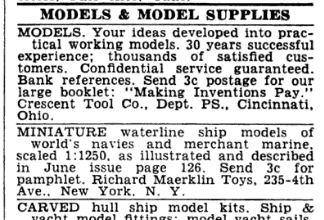 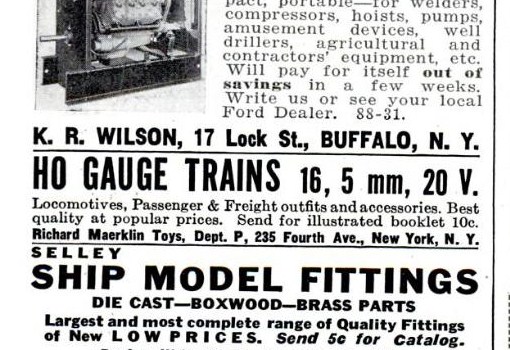 I hope you have thoroughly enjoyed this article and I kindly ask anyone who knows an explanation for this ausverkaufsliste to please contact me and I will add an update to this article.

Thanks to several German readers, we have been able to determine that these “ausverkaufte” lists were not actually an inventory of sold-out items, but rather items that are no longer in production and therefore are sold at a discounted price.  This fills in some of the gaps and explains why these letters and documents are carefully dated and updated regularly.  As items went out of production or were no longer available, new lists were received and certain items were put on sale in order to make room for new, incoming stock.  Perhaps the catalog with the illustrations represents the “ausverkauft” items of the entire year 1930 since there is no month on it.  Thanks again to the wonderful readers who were able to clear this up!  I have left my original assumptions in the article, but now realize the limitations of my ability to speak German.

Thanks again to those who helped.