Marklin first started producing 00 Scale export models in 1937 (just two years after the start of 00 Scale in 1935). Marklin primarily focused on export models for the British and American markets. German outline locomotives and coaches were made in British liveries. Locomotives like the R 700 and SLR 700 were painted in either red or green and detailed with “LMS” or “LNER” stampings on the tender.

The locomotives were actually produced alongside the standard domestic trains and simply converted in the factory to be for the British market.  An excellent example to illustrate this point is the 342 E LMS passenger coach producing during the years 1937 – 1938.   Underneath the factory over-painting, a faint “MITROPA” can be seen in the center along with the over-painted “SPEISEWAGEN.”  The gold stamping of the “LMS” sits directly above the model number “342” and is on all four corners of the coach. 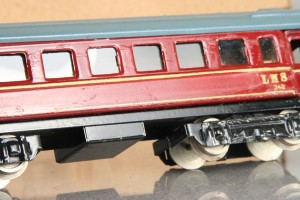 Marklin 342 LMS coach with factory over painting and “LMS” stampings.

Because of this simple factory conversion of German outline trains to British ones, the counterfeiting of such train pieces is very prevalent.  Many locomotives have been repainted due to paint chipping or fading over the years and some have simply been converted to British versions from German types.  Potentially the greatest export model for Great Britain is the E 800 LMS locomotive.  With fewer than 50 models built in 1938, the locomotive is a collector’s dream.  It features the newly released “Perfect Reverse” system introduced by Marklin in 1938 and is the only Marklin locomotive to be built specifically for an export market (it was not a converted German outline train).

Unfortunately 1938 was the last year of British export models made by Marklin.  With WWII looming in the distant horizon and political relations worsening, Marklin ceased the production of export models and focused on selling to American soldiers during the war.  The immediate post-war market with the release of the 1947 catalog did not contain any British export models.