In 1956, Märklin was still feeling the effects of the Second World War as they had to adapt to the changing environment in Europe. The following letter below was sent from the Märklin factory to a collector in Illinois in the year 1956. 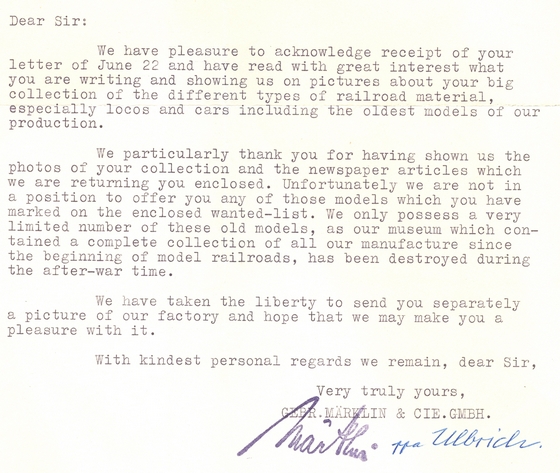 What brings particular interest to this letter and especially its historical resonance, is the following quotation:

“We only possess a very limited number of these old models, as our museum which contained a complete collection of all our manufacture since the beginning of model railroads, has been destroyed during the after-war time.”

Many other references and books specifically declare that Märklin facilities remained untouched during World War II and that Märklin continued producing trains and toys shortly after the war ended. Thus, Märklin had to maintain a friendly relationship with allied soldiers in order for them to remain production under the unstable German government and situation. Knowing that many American soldiers would possibly try to prevent this production and manufacture of Märklin’s toys, Märklin produced a special “starter set” for American soldiers during and after the war. This set was sold in a plain brown box (red ink was not used) and stamped on the outside with marking numbers. The sets included the correct voltage for US use and contained either an SK 800 or RS 800 locomotive with passenger cars, rolling stock, track, a transformer, and other accessories.

This letter, however, points to a different story that possibly included using Märklin museum models as a form of bribery for whomever attempted to halt Märklin toy and train production during the “after-war time.” One must wonder where these early museum examples ended up and how much of the museum was actually “sold off” or “destroyed.”

The only piece of information that we can know with absolute certainty is that the Märklin factory stood strong in 1956 as seen in this factory photo which accompanied the letter in a large brown envelope. 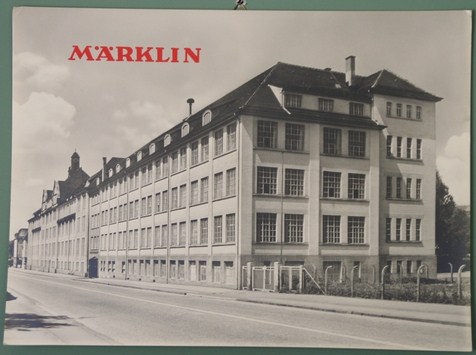 Marklin factory at Goppingen in 1956

Please note, after clicking on the link you will be redirected to an external auction site.  View all Top Picks here.